There have been no shortage of celebrations going on this morning in the Mightier Than the Sword UK office as C.S. Woolley’s book – Nicolette Mace: the Raven Siren – Filling the Afterlife from the Underworld: Volume 1 has been in the top 100 since 13th December!

Our web gremlins may have gone and done a screen print just so everyone can see!

Filling the Afterlife from the Underworld is a collection of short stories that take you into the world of Nicolette Mace in a completely different way to Beginnings, the Kevin Metis Saga and the Derek Long Saga. Instead of focusing on the overarching villains, the short stories look at the day to day grind of her life and offer some fun little insights, infill between the books and years that are jumped over in the stories and introduce you to other people in Siren’s life that are friends, enemies and sometimes a little of both.

Though these tales might not keep you on the edge of your seat, they are funny, sarcastic and a refreshing change to trying to cram a full mystery, thriller, suspense plot into a small word count.

Filling the Afterlife from the Underworld: Volume 1 is available in paperback and digital print from amazon.com.

As well as in paperback and/or digital print from the following retailers:

And how might you ask does C.S. Woolley decide to celebrate?

By going to see the Hobbit: Battle of Five Armies in 3D HFR wearing a cardboard beard…for the second time. 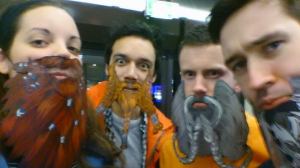 We’d all love to say we disapprove but really we’re a little bit jealous that we don’t have one of our own. Especially since though there has been some spirited debate in the office as to whether the new editions to the realm of Middle Earth have been any good, we are all agreed that the Battle of Five Armies was amazing! Badass Elrond was well worth the wait. Though we are all just a little bit sad that there won’t be any more trips into Middle Earth (aside from the multiple re-watchings of the six extended movies) we can be consoled with the fact that we do have Middle Earth: Shadow of Mordor to play on after we finish playing on Dragon Age: Inquisition and Alien Isolation that is.