Excited for the launch of In Exchange? We are too! As a special treat, here is an exclusive sneak peek! 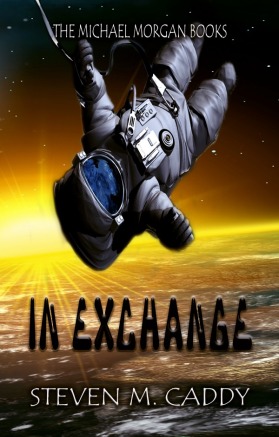 Michael somersaulted to turn around, and flew effortlessly through the hatch, back into the space station’s core. Peter had a bit of a job keeping up with him.
“Here at the back of the space station is the galley. The mission planners set the menus I’m afraid. Until a few years ago, we could choose what we wanted to eat, but we found that we were eating the same three things all the time, and after a month there was only stuff that we didn’t like. It made the following two months, until the next supply mission arrived, rather dull,” Michael explained, “or rather, even more dull than it usually is. I’m sorry, Peter, it’s better than what we had on the capsule, but it’s not a patch on what you get on the surface.”
Peter turned and looked down the length of the space station.
“It’s quite a lot larger than I thought it’d be,” Peter commented.
“Lots of people say that. There’s plenty of room to move about. With you aboard, there are eleven people here. You’ll find that most of the time, people are working, but the crew do get rest days in a rotation pattern. Most of the crew here at the moment are quite quiet, but we’ve had crew members bring musical instruments aboard. Other people bring other personal things here. Someone left a yo-yo here a few years ago, which was great fun, until someone lost control of it, and it broke a laptop computer.”
“Oh dear.”
“Yeah. Luckily it wasn’t me. I wouldn’t want to explain that one to mission control.”
Peter laughed, imagining an out of control yo-yo hurtling down the space station.
“What you’re looking down now is known as the core,” Michael explained, “It comprises of six six-port nodes that are all permanently docked end to end with each other. I say permanently, but I guess they could be split up. There are hatches stowed at the junctions, so that we can seal off a part of the space station if we need to. We did that once when we had a reduced crew for a while – to save power by heating less volume I guess.”
“How many crew members are there normally?” Peter asked.
“Well, there are eight labs, each of which has two sleeping compartments. So we could have up to sixteen people here. But there are only five docking ports for return modules, and each of those modules can take three people, so the limit is really fifteen. Normally, there’s about twelve, but it does vary.”
“Right.”
“I’d better explain the layout a bit. This rear node is obviously set up as a galley, but the exercise equipment that we use is also stowed in the racks here. It can get a little cluttered and busy sometimes. The forward and aft nodes each have an airlock on the side facing away from Earth, what you might call ‘up’. As you can see, we’re using this rear one for extra storage at the moment to reduce the clutter. I sometimes eat in there to keep out of the way.”
“Do you do many space walks?”
“I don’t. I’ve never done one. There’s no need. Other crew members do an EVA, an ‘extra vehicular activity’, every six weeks or so, usually to perform regular maintenance, or do some experiment that requires exposure to space.”
“Right.”
“Now, where did I get to?”
“Sorry, I’m asking too many questions. You were talking about the six nodes forming the core,” Peter recalled.
“Ah, yes. We refer to the faces of the nodes as fore, aft, port, starboard, Earth facing, and out facing. I don’t generally talk about ‘up’ and ‘down’, because without gravity, they don’t have a clear meaning.”
Peter nodded, listening intently.
“The Earth facing ports are normally used for the return and resupply modules, apart from the aft-most node, where we have this observation module.”
“Ooh!” Peter hadn’t noticed the module below his feet, which had many shuttered windows, “Why are all the shutters closed?”
“No idea,” Michael shrugged, “You can open the shutters and spend hours watching the world go by in there.”
“Literally. I wish I’d brought a camera with me.”
“There are station cameras that you can use. We’ve got one with a massive zoom lens, which is what I used to take the pictures I sent to you a few weeks ago.”
Those few weeks seemed like years ago to Peter, as he thought back to the images he’d been emailed.
“I said there were eight labs. They are on the port and starboard, left and right, hatches off the centre four nodes of the core. The laboratories on the right have odd numbers, the ones on the left have even numbers. Normally one or two crew members live and work in each lab. Lab one, which is the one that’s on the right, furthest away from us, is normally left unassigned, and we use it for meetings, video conferences, and tasks that need a little more room.”
“Like swinging a yo-yo?”
Michael laughed, “Yeah.”
“So who is in which lab at the moment?” Peter asked.
“If no one has moved since I was last here, Dave Jameson is in lab two, he’s here to study the effects of weightlessness on sleep. Possibly something to do with Max, he seems to have trouble sleeping in the weightlessness environment. Lab three is home to Wayland Harlow and Josh Eldridge. They’re veteran astronauts. Few people have spent as much time in orbit as I have, and those guys head the list of regular astronauts with most time in space. I can’t remember what they’re here to do. They seem to spend a lot of time cracking bad jokes.”

In Exchange is currently available for pre-order for Smashwords, iBooks, Kobo, Barnes and Noble and Kindle readers, priced at $2.99, and will be officially launched on 12th April 2016.