When it comes to space, there is something about it that draws out the imagination. From TV and movies to games and books, we’ve gone through and found our favourite interpretations of life in space in honour of the release of In Exchange on 12th April 2016. So in no particular order:

Star Trek as a franchise is possibly one of the greatest to ever exist. Not did the first series attain a cult status that led to some of the best space movies and reboot movies that have ever graced the silver screen, but the number of TV series to exist in the same extensive universe is mind blowing. Rather than pick a particular one, we’ve chosen to honour the franchise as a whole – this is partly as none of us can agree on which is the best series, but also because each movie and series has something in it for Star Trek fans to love. Besides, which other space based series can boast a commander that has to step over chairs to sit in them?

When it comes to games set in space (we’re not including No Man’s Sky just yet since it hasn’t been released) Mass Effect might just be the pinnacle of perfection. It is a game that can be replayed again and again and loved more every single time – even the first game, which is looking very dated now and feels clunky to play when compared to Mass Effect 3. It is packed full of some of the most imaginative characters and geeky references, throw backs and the best damn pilot in the galaxy. Though nobody ever has the same Shepard, every incarnation of the game’s hero is awesome and when you throw in the unstinting loyalty of Shepard’s companions – especially Garrus and Joker, you get one brilliant space adventure.*

The manga and anime genre has such a wide range of different settings, pulling one out of it that is exceptional is so difficult, but Captain Harlock: Space Pirate, really is one movie that distinguishes itself. Yes, the original cartoon was comical and a much more in depth exploration of the source material – the recent movie blows everything away and can easily be watched repeatedly. After all, everyone in Captain Harlock seems to be searching for their kind of redemption, so what could possibly go wrong?

Whether you like the original series or the more recent reboot and spin off series (Caprica), BSG has got so much to offer. Rather than being an exploration mission that involves hundreds of different races it gives a twist on the universe – humanity is alone in it, save for the technology it has created that now threatens to destroy them. The cylons and the fight against them is something that is easy to relate to and being set so far from Earth makes it all the more imaginative.

The beloved and short-lived creation of Joss Whedon is something that sci-fi fans will never give up on seeing a second series of, and with good reason!

“Picture Star Wars, but the Rebellion is crushed. Han and Chewie escape to the Outer Rim, where they take whatever smuggling jobs they can find. The worlds are mostly tech-poor, so no blasters. Now, change Chewie into a hot woman soldier, give her a smart ass husband for a pilot, a rude mercenary for protection, a cute farmgirl mechanic, a smoking hot professional escort, and a couple of mysterious passengers. And that’s just the first episode.” – Jeff Struckhoff

What’s not to love? Packed with adventure, a struggle to survive, being chased by the authorities, haunted by the past and threatened by a race of mad cannibals that it turns out the higher ups in the confederation of planets created and you might understand a little of why so many still want more from this series.

Before this game came out, RPG games were a little bit samey, yes, they were enjoyable, but Bioware brought something new and fantastic to the table and created some of the best Star Wars canon around (the Mandelorian Wars). With fans working on transforming the old graphics of this game into pretty shiny new ones, we couldn’t be more excited! This game gave Star Wars fans the chance to run around, become a Jedi and save or condemn the galaxy as they saw fit and gave us the brilliance of HK-47, our own wookie friend in Zaalbar, a grumpy former Jolee Bindo and the chance to romance a character, that could go very well or extremely badly depending on how things played out. Besides all this, you were being racing against the bad guys and had one of the best gaming twists thrown into the plot to boot!

The Hitchhiker’s Guide to the Galaxy

One of the most beloved and influential books of all time, there isn’t much we can say about the Hitchhiker’s Guide to the Galaxy that you won’t have heard before, all we have to say is that no we don’t know the question, but the answer is 42 and if you haven’t read it, well you should!

Spending yet more money on rescuing Matt Damon, the Martian is an exceptional space movie that is a lot closer to home than other movies and TV series set in space. The reviews will give you a much better idea of how brilliant this movie is than we can!

Though the movie has some merit, the series that the Stargate universe has spawned are what we adore. Whether it is the original SG1 team, the series set in Atlantis or Universe, there is plenty to get exited about when it comes to space.

Space marines in battle armour and genetically modified humans fighting alien races with the help of an AI – Halo not only has an incredibly rich back story and compelling plot that has spawned movies and comics to support the series, but it is amazing fun to play. Besides, there are very few franchises that can boast a spoof that is as funny and entertaining as the wondrous Red vs. Blue.

Cowboy Bebop is space combined with film noir to create something that is just spectacular and irresistible cool. Not only does Cowboy Bebop follow bounty hunters in space, it is also one of the influences on C.S. Woolley‘s Nicolette Mace: the Raven Siren series. 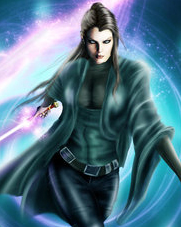 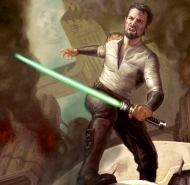 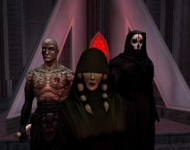 *We would like to apologise to all those gamers who are now feeling the need to spend several hundred hours playing through Mass Effect from 1 to 3 yet again.**

In Exchange is currently available for pre-order for Smashwords, iBooks, Kobo, Barnes and Noble and Kindle readers, priced at $2.99, and will be officially launched on 12th April 2016.

**We’re really not all that sorry as we know that it will be freaking epic.