The Chronicles of Celadmore is a fantasy series based in a fictional realm, written by C.S. Woolley. The Chronicles of Celadmore falls into the epic fantasy end of the fantasy genre with some influencing elements of gothic fiction and gritty realism that combine to create a fantasy series that is as much for those who like fantasy as it is for those that generally find the genre to be too fluffy. The gritty nature of the series will appeal to those that enjoy the Game of Thrones series and the writing style will appeal to those who enjoy the works of Tolkien, Joss Whedon and Raymond E. Feist.

The titles in the Chronicles of Celadmore that are currently available are:

An empire will rise and nations will fall.

The nine kingdoms of Celadmore are at war. The people suffer under tyrants that strive to gain land and power in the struggle for superiority.

Queen Kasnata is trapped in a loveless, political marriage to King Mercia Nosfa VI. Her children are held hostage by her husband to force her armies to march on his whim.

The people of Grashindorph, capital city of Nosfa, are oppressed by their king and beneath the surface of the city a revolution stirs.

As war threatens to tear Celadmore to pieces, Kasnata struggles to bring peace back to the realm. She fights against venality to bring hope to all those that are oppressed, as well as those that have been caught in the savagery of warring kings.

Can the legendary queen, Empress of the Order find the strength to fight knowing the fate of her people rests on her shoulders?

“We assume he has been alone with the queen for the last few days and yet no one seems too concerned about it. He seems to have the trust of a lot of very suspicious individuals. If I were an assassin or a spy, then that is how I would infiltrate our people.” Misna observed with a shrug.

“You are an assassin, spy and infiltrator.” Amalia said with a raised eyebrow.

“Then perhaps we should be more mindful of General Bird than we have been.” 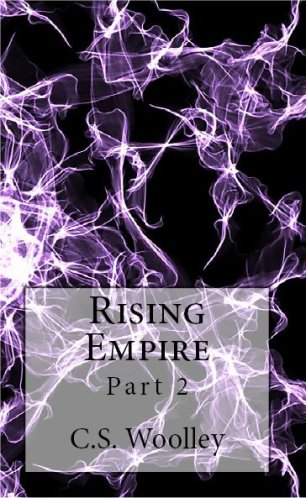 The blood moon rises and madness is unleashed.

The nine kingdoms of Celadmore are at war. The people suffer under tyrants that strive to gain land and power in the struggle for superiority.

Kasnata, Queen of the Order and Queen of Nosfa leads her armies against the people of Delma. A war she did not want to fight, but her husband, the King of Nosfa, Mercia Nosfa VI has forced her hand.

Leinad, the heir to the throne of Nosfa and son of Kasnata, is held hostage in the city of Grashindorph where revolution is beginning. Hermia, mother of Mercia and former Queen of Nosfa leads the revolution against her son, a revolution to end the wars and tyranny that their people suffer under. Kasna and Kia are safe from their father in the Oasis of Tulna, but Duke Kelmar DeLacey, Regent of Delma, still hunts for them.

Kasnata’s empire is growing and her legacy is being forged through war, not diplomacy, a mantle her people will carry down the ages.

But there is more at work than any mortal knows, their lives, though fleeting, will form the realm and the consequences of their actions will be felt for centuries to come.

The streets run red with rebellion

The siege of Delma has not been broken. Kasna remains a prisoner, a prize of war and a bargain chip to be used against her mother. Duke Kelmar DeLacey, the Regent of Delma, must choose between obeying his King, gone mad, and the woman he loves, the daughter of his most dangerous enemy.

Neesa, the last heir of Valia, assaults the fortress of Animoore, the first outpost of Kasnata’s new empire, the haven where the son and daughter of Rathe and Kasnata were supposed to be safe. Yoav and the Eight fight to protect them, but the might of the blood moon is an overwhelming force that is feeding Neesa’s power.

The guardians have left the Ballo Fortress and move to advise Kasnata in the absence of the Abbott and Cassandra. Cassandra is headed north with Tola, Shamgar and a boy that is as dangerous as he is mysterious. The Abbott is in the Spire, waiting for events to unfold before he emerges from it.

King Mercia Nosfa VI holds Lady Mia captive, a trap laid to capture her brother and traitor to his people, General Rathe Bird. But the king’s madness increases with every passing day, losing what is left of his mind under the influence of Neesa’s magic. Mia weeps over Joab, her heart and will broken, resigned to her fate as a unwilling second bride of the king.

Rathe, Mathias, Asahel and Helez strike at the heart of Grashindorph, undermining the power of the king, working to free Mia, as Layla and Jephthah have been dispatched to the streets of Grashindorph to find leaders amongst the people to finally start their revolution and rescue Prince Leinad from the clutches of his father.

Kasnata’s empire is rising, the people of the cities of Celadmore can taste revolution in the air as the Gibborim stirs, but how will those that have fought and died be remembered and how will the most dangerous secrets of Celadmore be buried? 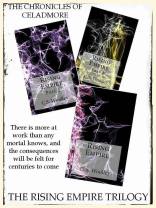 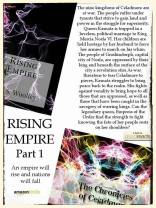 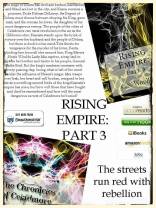 The Shroud of Darkness Trilogy

Evil Stirs, and she will answer

In the realm of Celadmore, evil is stirring. The war torn land has not recovered from the last conflict as evil rises and threatens to ensnare the world of light.

Venetia, favourite daughter of Queen Annalia, must fight enemies and allies alike. She must uncover truth amidst deception to discover the source of this new threat to her world before the darkness engulfs it.

Four years after the Dragonian Wars raged across the realm of Celadmore, leaving it ravaged and ruined; Venetia, Queen of one of the five Anaguran tribes has seen evil lurking once more. She led the Allied Spirit of Celadmore to victory against the tyrant, Dragonious, but the world has changed.

Politics, deception and mistrust have separated the old alliances so now each nation stands alone. It is up to Venetia to unite not only the five tribes of Anagura, but all the peoples of Celadmore to fight against an unseen enemy that threatens to destroy the peace that she has fought so hard to achieve.

Traitors must be found, the world must be saved

United they must stand for destruction is upon them. The realm of Celadmore faces it’s destruction as a war that none perceived is brought against them.

Venetia, Queen of the Order of Anagura and Queteria, must forge a new alliance between the nations of Celadmore against the evil that Aksoth, Lord of Nether Roth, is set to unleash. The Allied Spirit of Celadmore must be raised and march once more.

Venetia, Queen of Dark Fire, so sure of her victory in war may now suffer a defeat that will destroy her home realm of Celadmore.

The dark forces are gathering, their mastermind, Aksoth, has revealed himself. No Oracle predicted his coming, no warrior was prepared. Venetia must gather her companions and ally the divided nations of the realm of light or face it’s utter destruction. 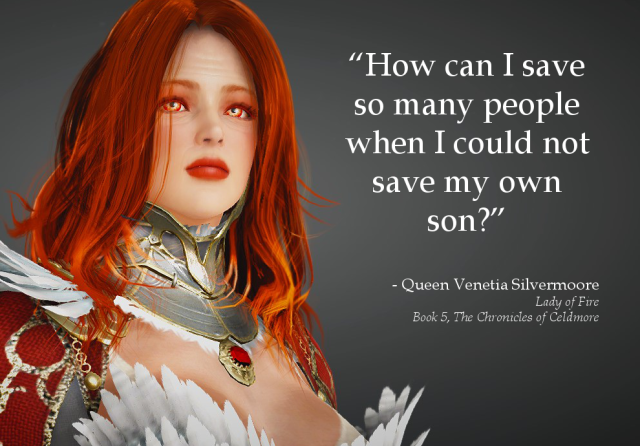 The end is here. Aksoth’s forces roam unchecked across the plains of Celadmore; the people of Celadmore have been forced to retreat to the fallen city of Grashindorph. Within the city there is trouble. Leaders of each of the countries of Celadmore seek to control the city.

Mistrust runs like a fever through the city. Scheming and corruption distract the people from preparing to stand against Aksoth in one final battle.

Revolution stirs amongst the poorest of the people; Venetia seeks to restore Gruagadon to his rightful place on the throne of Nesca and will sacrifice anything to get him there.

Harmony is so far from their grasp that the thought of victory fades as forces, beyond the control of any mortal, clash and the future of Celadmore is decided.

In this final bastion, they must find victory or Aksoth will purge the realm of light of all life. 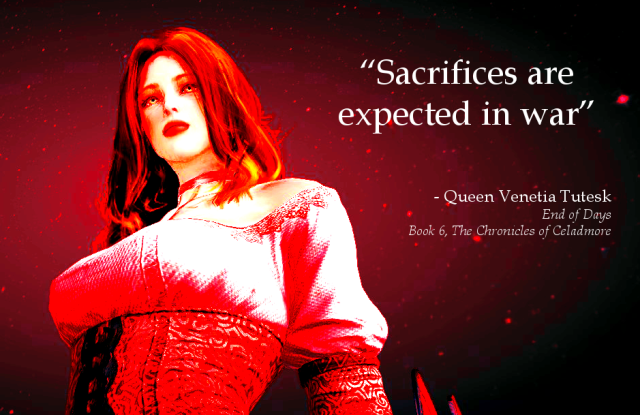 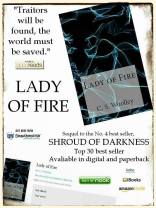 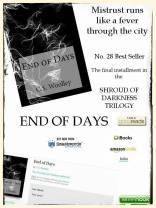 You can purchase all the books in the Chronicles of Celamdore in digital and paperback formats. You can also get the Shroud of Darkness Trilogy in a boxset edition.

The next book in the Chronicles of Celadmore is the start of the Fading Dawn Trilogy: When Darkness Falls and features three Murder in March competition winners who will all see characters named after them being killed off during the book.