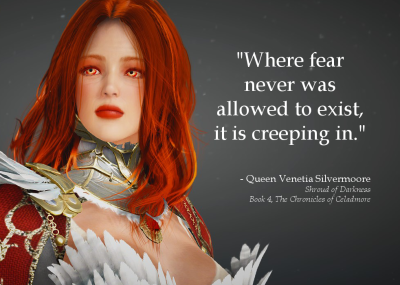 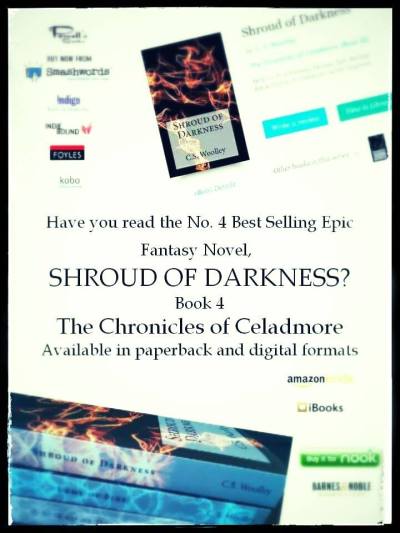 “When I started writing Shroud of Darkness I was 12. I had been inspired to write something epic, but it wasn’t called Shroud of Darkness until I was 15. Originally the book was going to be a single volume called Flight of the Swallow. The heroes and villains were the same, but the portals that feature in the series were used quite differently. Starting writing something when I was so young, it was hardly surprising that the book transformed into what it is now. This was partly due to me growing up and gaining more experience of the world, but also from the inspiration I drew from the trailer for Lord of the Rings: the Fellowship of the Ring. Arwen threatening the Ringwraiths in the river gave me the inspiration to create the warrior women of the Anaguras and the appearance of Strider in the trailer gave rise to the Queterians. At that age I hadn’t read Lord of the Rings and I hadn’t even seen the movies before I started writing.”

Shroud of Darkness is an epic that sees Celadmore as a very different realm to the one that Kasnata and her people inhabited.

“Things have changed in the 400 years between the two trilogies. War still remains though. Celadmore is recovering from a twenty year war that has ravaged the land and the characters are all feeling the after effects of the events from the war. The Order is much more divided and the Valians are far more of a threat than they were in Rising Empire.”

Though the world has changed since Rising Empire, you also get to experience much more of the realm too. The central character in Shroud of Darkness is Venetia, one of the RAVEN queens of the Anaguras, the Queterians have their own king and though they are still one people, their lives, cities and military forces are split.

“Shroud of Darkness is a book that still holds a very special place in my heart, it’s the least serious of all the books in the Chronicles of Celadmore and the characters are living in a state where they are still celebrating the end of conflict and really don’t want to be drawn into another war and most don’t even want to admit that there is anything wrong.”

There are a few customer reviews to be found for Shroud of Darkness:

“It’s hard for books to distinguish themselves nowadays, especially books in the fantasy genre.

There are many books out there that are well marketed but when it comes to the text, it is always disappointing. This one is brilliant. It says it’s the third book in a series, but it’s the first one I have read and I was able to follow everything that was going on without a problem! The characters are a myriad of people that seem to be written in a very realistic way – you hate some of them, find some of them irritating, some of the stupid, some of them extremely unlucky, some of them that you fall instantly in love with and some you just like because they are, for want of a better word, cool. I’ve talked to my friend who recommended this book and their favourite character is completely different to mine.

The character of Caslo had to be my favourite, he isn’t a major character as far as the plot goes but I instantly fell for him and felt that that he was, to put it simply, cool.

The feel of the book is a bit like the writing of Tolkien but without the long drawn out conversations. The world you enter into is well fleshed out, complete with different languages, races of people, kingdoms, tensions and feels fully formed from the first page. The history is well established and it almost feels like you are about to go exploring the realm of Celadmore as you delve into the pages.

The plot on the face of it seems to give you everything upfront, but this is a ruse. There are many twists to the plot and C.S. Woolley has managed to keep the plot simple without being boring, focusing on key elements of what makes a good story and filling out the book with the many subplots that are woven together with the main plot line and flesh out the story into something wonderful.

I am now reading the next book in the series as the cliffhanger at the end demanded I read on before going back to find the other books in the series. I would recommend this to anyone who loves to read and especially those who don’t like the fantasy genre – it may just turn you!” – Taken from Amazon.com

“My favourite character in both the Chronicles of Celadmore and the Nicolette Mace: the Raven Siren books first appears in Shroud of Darkness and there is a child-like quality to a lot of the characters. Most of them are still young and have a very narrow view of the world that has been forged by the war. There are a lot of insular attitudes and misunderstandings that come out of these. Shroud of Darkness will also always be really special for me as a book as it got to number 4 in the Kobo fantasy charts and was outselling George R.R. Martin, Raymond E. Feist, Robin Hobb and it was the first moment when I felt like a real author.”

Shroud of Darkness is available for £1.99 in digital formats and £9.99 in paperback formats from all good retailers. You can get your copy now from amazon.

Shroud of Darkness was originally over 1,000 pages long and comprised most of the events of Lady of Fire and End of Days. When C.S. Woolley finished writing the original draft, she decided there was just too much for it to be featured in one book and so split the story into three to let it develop more and ultimately led to a more satisfying story as well as the creation of the other 18 books in the series as well as the 20 part spin off series, The Dragonian Wars. For those of you that are counting, that’s 41 books in total!

If you already own a copy of Shroud of Darkness, then the fun doesn’t have to stop there! A line of Chronicles of Celadmore merchandise has been created and some of it is already available for purchase!

Other Shroud of Darkness Merchandise

A range of notecards and other posters featuring the character faces and quotes (some of which you can see further up in this blog post) are due to be released along with a range of bookmarks and postcards** slightly later this year. The notecards and posters featuring the characters are being released to raising money for charity. 50% of the profits from every sale of the notecards and posters featuring the characters are to be split between two charities – 25% of the profits going to the Broad Appeal and 25% of the profits going to the British Heart Foundation. Though we don’t have an official release date for these yet, we do know you will be able to order them for collection at the UK Indie Lit Fest (that C.S. Woolley and Steven M. Caddy are attending) and you will be able to purchase them for delivery through this site as well as through Etsy.

** the designs for the bookmarks and postcards have yet to be released.