For the third day of advent we are taking a trip to the world of Ragaris, created by Penelope Wallace. You may have seen that her debut novel is one of Amazon’s hot releases in the Christian Fantasy genre, so with the run up to the celebration of the birth of Christ, here’s a specially written short story of Christmas straight from the country of Marod.

If you want to find out more about her debt novel, We Do Not Kill Children, you can read more here. This tale takes place a few years before the events of her debut novel and is a wonderful story about the power of giving.

Every Christmas Eve, the city was darkened save for a single torch carried to the Cathedral by a girl on a donkey – and then candles and lamps and rushlights were lit for everyone to take home.

The light comes again: long ago and far away in Bethlehem, but somehow also here and now in Stonehill.

That year the royal family walked back with their lantern to sleep a little; and next morning, like other parents, the Queen and King gave their children gifts. To Princess Emmia they gave a new bow, and she stroked it lovingly. “Now I can defend myself.”

“Yes, but you must still take soldiers with you.” The Queen didn’t like to think of what had almost happened, six weeks ago.

“I won’t take that soldier, Mother.”

“I am not hearing this again. He saved your life.”

“And he disobeyed my orders, a Princess’s orders. I want him punished. Flog him, as a Christmas gift to me?” She put her head on one side with a childish smile, inappropriate in a woman of nineteen.

“An odd gift, I think. Run along and dress for Mass.”

Later came the Christmas feast in the Great Hall. After Advent plainness, the mere smell of meat – heavy, warm, almost solid – might have filled stomachs. The Hall was full of noise, and men and women in bright gowns and merry mood.

On the dais Queen Darisha sat with her family (husband, two sons, daughter, sister and brother-in-law) and selected guests. And when her people could spare a glance from the food, they looked up, and they seemed reassured.

She was fifty-two years old, and had reigned for eighteen years. Her face was round and motherly, so that royal dignity was always an effort, but her eyes, she hoped, were still sharp. On this glad day she wore a purple gown trimmed at the bodice with foreign lace, and at the sleeves with ermine, and on her piled –up grey-streaked hair she wore the crown of Marod, gold and pearl and a single sapphire.

Members of the Queen’s Thirty stood around the walls. The most beloved of all her servants, sworn to defend her with their lives.

Those at the High Table ate and drank and talked, and were careful always to look happy; and after a steady hour and a half the songs had been sung, the bones picked, and the plates emptied. Tables were pulled back to clear the centre of the Hall… and all looked up together, expectant like baby birds, with open beaks.

It was time for the Queen to do what Queens must: reward those who have proved loyal, bribe those who may need persuasion. The Christmas Giving.

She stood, and the herald called names, and happy people knelt to receive lands forfeited by criminals, or other gifts found or made. There was cheering.

The afternoon was fading, and the shutters were fastened. Light from the torches flickered, dancing on the familiar faces, changing them.

Finally. Her feet were aching. “Dorac, son of Araf, approach.”

The young soldier had to be pushed towards the dais, stumbling a little. He was clean, but his dull jacket and hose were patched, and his hair tied back with string. A confused and unbeautiful face.

The Queen said, “Forty nights ago, a woman of this Court was set upon by scoundrels intending robbery, or perhaps rape and murder. You and another fought them off, killed or captured them. That deserves praise, and praise has been given. Then you were ordered to kill your prisoners, and you refused, because you said trial should come before punishment.”

Now he was looking very nervous.

“I don’t know what happens elsewhere, but in this kingdom even the great should keep the law, and even the lowly may tell them so. Take this, Dorac, with my gratitude.”

And he looked up at her. She saw his face, his life, change. She almost wept.

The gift was a sword – good, but not extraordinary. She trusted it would serve him well. He took it as if he’d never seen one before, and had to be nudged by the Steward to get up, and bow, and walk away.

“Do you know, mother,” said the Princess afterwards, “he looked as if he’d never had a Christmas gift from anyone before.”

The Queen thought of her dear friends, her Queen’s Thirty. They would all be willing to die for her.

But Dorac, she thought, would feel that was too great a privilege.

We Do Not Kill Children 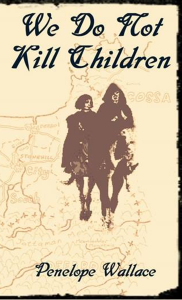 “We do not kill children; we do not commit rape; we do not take pleasure in torment.”

Dorac Kingsbrother was one of the King’s Thirty in the kingdom of Marod. That was before he was found guilty of the murder of Lord Gahran’s three children. Though Gahran was a traitor, his children were innocent. The code of the King’s Thirty leaves no room for such a barbaric act, and for this heinous crime Dorac faces a life in exile.

The shame of such a sentence is something that Dorac can’t brook, and so he sets off on a journey to the Old Stones, the place where those that seek death meet their end. Followed by Gormad, a child in search of adventure, Dorac is not alone on his final journey.

But not everyone believes that Dorac is guilty. Gemara Kingsister, head of the Six, investigates the murder of Gahran’s children; though there is more at stake than the life of a lone warrior in this, the first of the Tales from Ragaris.