On the seventh day of Christmas my true love gave to me, seven swans a swimming

“Are you ready?” Lee asked his brother. The two of them had waited until their mother had gone out to her shop for the day before they made their plans. The two boys had been adopted by Miss Baker when they had been found on the doorstep of her seamstress shop.

“Are you sure this is a good idea?” Stanley asked as he followed Lee out of the small house that stood on the edge of the village of Stickleback Hollow.

“Of course! We need to go get our boat back.” Lee smiled at him. Both of the boys knew that Miss Baker wasn’t their real mother, but their family was closer than most that were related by blood. Stanley worked as the boy for the butcher and Lee was the boy for the baker. Both boys started working long before their mother rose to go to her shop, but the boys always came back for breakfast before she left.

Christmas was always a quiet and enjoyable affair for the family. They spent Christmas Day at Grangeback and then on Boxing Day they went for a walk around the woods. It had been on Boxing Day that Lee had begun to plan rescuing their boat from the frozen lake. Stanley hadn’t wanted to go back to the lake ever again, but his brother was far more convincing than Stanley liked.

It had taken three days for Lee to talk his brother into his scheme and a day to gather the items that they would need in order to get their boat back. Lee had borrowed some pikes from the blacksmith without the old man knowing; promising Stanley that he would return them once the boat was safely back ashore.

The two boys set out from the house and went around the edge of the village, making sure that no one saw them as they went. They ran as quickly as they could until they reached the safety of the tree line. The two boys paused in the trees to catch their breath before they walked to the edge of the lake.

The snow was still thick on the ground and the lake was frozen solid. The two boys walked gingerly across the ice until they reached their boat and climbed over the side of it. When they were both settled in the bottom of the boat Lee handed Stanley one of the iron pikes he had stolen from the blacksmith. The two boys hit the ice around the boat until the boat was freed from the ice. Stanley took up the oars and started to manoeuvre the boat back towards the shore. Lee leaned over the side of the boat and kept breaking the ice in front of the boat until they reached the bank.

It was hard and slow work, but by the time they had finished, both of the boys felt proud of what they had accomplished.

“You know that if your mother finds out about this, you’ll not be able to sit down for a week.” Alex said. The two boys froze in the boat as they looked up at the hunter who stood on the shore, leaning against one of the trees.

“You’re not going to tell her, are you?” Stanley asked as Lee jumped out of the boat and started to pull it onto the bank. Stanley followed his brother to help him get the boat out of the water.

“I won’t need to; did you even think about what you are going to tell her when she sees that the boat isn’t stuck in the lake anymore?” Alex asked with amusement.

“You told me that you’d thought of everything!” Stanley cried.

“I wouldn’t worry about it too much.” Alex smiled at the two boys.

“Leave the boat here and I’ll tell her I got it out for you.” Alex said with a shrug.

“Why would you do that?” Stanley asked.

“Because you’re going to need to put those pikes back before the blacksmith notices they are missing and because you haven’t noticed what breaking the ice did for the lake.” Alex grinned.

“What are you talking about?” Lee asked.

“Just look at the water.” Alex said. Lee and Stanley both turned around and looked out at the lake. A group of seven swans had come out of the forest and was moving across the ice to the open water. The two boys watched as the swans slipped into the cold water and started swimming around.

A Thief in Stickleback Hollow 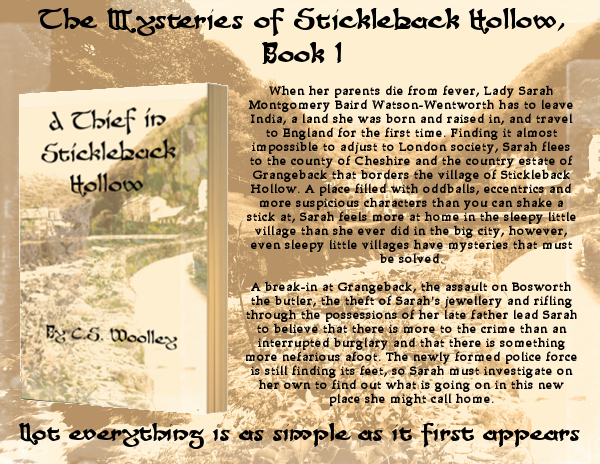