This is a guide to the characters from the Rising Empire trilogy. This page is work in progress and will be updated periodically.

The daughter of Jadow and Tsmara, the two monarchs of the Order that brought about peace in the realm, Kasnata has always felt that she is living in their shadow. Given the throne when she was barely a teenager, not all her people had faith in her and many left for the tribes of Valia, the traitors that would see a different line of monarchs on the throne of the Order. But she didn’t give up. No matter what the situation, Kasnata strives to do what is best for her people and for her family. She is not only the queen of the Order but the queen of Nosfa as well. She married King Mercia Nosfa when she was young and has regretted doing so for most of her life. Kasnata is clever and wise, but also given to making rash decisions.

The son of Lord Haston Bird and Lady Marcia Nosfa, Rathe holds a legitimate claim to the throne of Nosfa, a claim that has driven the king to persecute his family. Rathe is a young man with no ambitions to take power from the king, instead he has only ever wanted a quiet life, a life that would see his sister, Mia, safe and able to enjoy herself without the king watching her every step. Loyal and brave, he is a true knight and feels more of a kinship to the people of the Order than he does to those that serve the king.

The king of Nosfa and husband to Kasnata, he is a paranoid man that once loved his wife, but now hates her with a burning passion. He knows how dangerous she is and how valuable she is as a military asset though. Mercia took his three children – Leinad, Kasna and Kia – hostage so that he could control his wife. Though Leinad is safe from his father, as the heir to the throne, Kasnata does not trust that her son will remain that way. Mercia has been trying for years to sire children with other women, but has had no success.

The oldest of Kasanta and Mercia’s daughters, but the middle child overall, Kasna is strong-willed, even more so than her mother. She is the perfect infiltrator as she has learned how to manipulate people and use their pre-conceptions and prejudices to her advantage. She will do whatever it takes to protect her sister and wants nothing more than to be reunited with her mother. Kasna is most deadly when armed with twin daggers, but she can hold her own with a long blade as well. 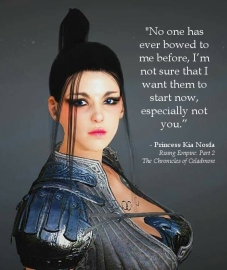 The youngest daughter of Kasnata and Mercia, Kia is willing to follow her sister anywhere and do anything that she tells her. As young girls, Kasna was all that Kia had as the two were separated from their mother by their father, used as hostages by Mercia to ensure that Kasnata would do what he wanted and not turn her armies against him. Kia is named after one of Kasnata’s generals and is a particularly skilled archer. Though she can also fight with a blade, she is not much of match for some of the realm’s better swordsmen.

A former ally to the Order, but now their enemy, charged with a single duty – to bring the Princess Kia and Kasna to Delma. Kelmar is a man that knows his duty and what is required of him as Regent of Delma. He will do anything he has to in order to see his duty is carried out, that his family name is not disgraced and that the kingdom of Delma survives.

Tola, The hero of the war of the east

Tola is Rathe’s second-in-command and a great ally to the Order. He has served the nation of Nosfa for many years and has earned a reputation as a hero to those in both the army of Nosfa and the Order. He is Renta’s lover and has been since the two met many years ago. Tola is not a blind servant of his superiors; he lives by his own code – a warriors code – which can leave him on the wrong side of his commanders. Tola is strong and prefers head on attacks to stealth, but can also appreciate the value of a good battle plan.

Scattergood, Merinda, Lucinda, Warner, Resha, Colm, Vaike and Adino, these eight children were found wandering the wilds by Kasnata’s forces and were adopted by the Order. Children wandering the wilds of Celadmore tend not to be normal children and the Eight are no exception. These eight children are the first of the elite warriors that come to define the skills that are prized highest by the members of the Order for centuries after they have passed.

A general that has his own agenda, but serves King Mercia Nosfa for as long as it is convenient. General Seaton is calculating, cold and willing to give his life for his cause.

The grumpy head healer of the Order. Payne is an exceptionally skilled healer and uses blood magic in order to save people. He doesn’t exactly have the best bedside manner, but if you are injured, your best hope of survival is to be brought to Payne.

A member of the Gibborim, the underground resistance in Nosfa, Asahel has been trained to act as the shield to whoever leads his people, or to whoever he is assigned to. Asahel is the best friend of Helez and the more level headed of the two. He tends to take a longer view of things and loves playing chess. He is stubborn and doesn’t give up on situations, no matter how bleak they seem. However, he does have a tendency to be blinded by a need for vengeance. His dark skin, shock of white hair and chiselled features make him one of the most attractive men in the Gibborim and all the young women of the Gibborim have dreams of marrying him one day.

A member of the Gibborim, the underground resistance in Nosfa, Helez has been trained to act as the shield to whoever leads his people, or to whoever he is assigned to. Helez is the best friend of Helez and has a hot temper that often leads the two men into trouble. He has a very narrow vision of the future and tends to act first and think later. He loves to compete in everything he does and enjoys playing chess with Asahel, if only to beat his friend. He is an older brother, fifteen years senior to his sister, and has stepped into a fatherly role as their parents died when his sister was still small. He is a broad man that makes any man look small by comparison, his sandy hair and bright blue eyes are unusual in the nation of Nosfa, especially in Grashindorph.

The assassin that is on the payroll of Grashindorph, Neesa is as dangerous as she is beautiful. Not only does she kill for money, she keeps the king’s bed warm and has big ambitions of her own.

An assassin and spy from Roenca, Mathias’ people are one of the Free Cities of Celadmore, but they support the Order in all that they do and are close allies of their people. Mathias was dispatched to watch over the princess’ of the Order whilst they were imprisoned in the Abergorlech fortress.

Haman is the leader of the Gibborim in name, but in reality, he follows the orders of Lady Hermia Nosfa. Haman wants to see his homeland freed from oppression and is a great civic leader. Whatever problem his people have from polluted water to sickness to lack of clothing, he is able to find a solution that enables them to survive.

Jephthah is Lady Hermia’s shield and the mentor of Asahel and Helez. He is a man that is the size of a mountain and fiercely loyal to his protectee. He is willing to lay everything aside to serve her, even his relationship with his wife. Jephthah is often found arguing with Layla, Hermia’s shadow, as the two disagree over how best to protect her and what actions best serve the Gibborim.

The youngest child of Lord Haston and Lady Marcia Bird, Mia is a quiet and mousey girl. She is beloved by her people and would do anything to stop her people and her family from suffering. She adores her older brother and her father and looks up to them both as heroes.

The former queen of Nosfa that everyone outside of the Gibborim believes is dead. Her son, king Mercia Nosfa, tried to poison her to remove her from threatening his position on the throne. Hermia is military minded and is in charge of martialling the forces of the Gibborim and organising the rebellion against her son.

The Lord of Afdanic and former steward of the throne of Nosfa. His best friend was King Rosla Nosfa, Mercia’s father. He was asked to take the throne by Rosla on his death bed as he didn’t think his son was ready to take the throne. After Rosla died, Mercia had Haston removed from stewardship, and for the sake of the kingdom and peace, Haston stood aside. He knows how precarious his position as a noble of Nosfa is and everything he does is to protect his children as much as his the people of Afdanic.

A spy for the Order, Shaul has been trained by several different generals of the Order and is a master of infiltration. He is well versed in other cultures and but he is often extremely nervous when he first enters enemy territory. He is easy going by nature, but does make foolhardy decisions that place himself and others in danger.

One of the most experienced and trusted spies of the Order, Methanlan has a plodding personality that balances well with Shaul’s. He takes his time and only acts when he is sure what the best course of action is. He is able to worm his way into the confidences of powerful people without arousing suspicion. 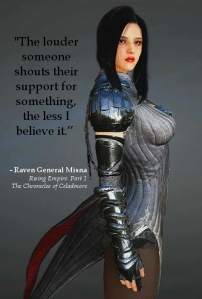 Raven General Misna is the head of the Raven unit of Queen Kasnata’s army. She is a spy and assassin that has worked tirelessly for most of her life to protect Kasnata from enemies both within the Order and from without. Misna is the partner of General Amalia.

Misna is a ferocious fighter, but she is far more dangerous due to the large amounts of data she is able to gather and weild as a weapon against people she sees as enemies.